Different between fuse and circuit breaker with symbols

Different Between Fuse and Circuit Breaker

What is the difference between a fuse and a circuit breaker? In electrical circuits, we identify two types of circuit safety, namely Fuse and Circuit Breaker.

These two components are designed as highly current sensitive devices and are placed in the current path. 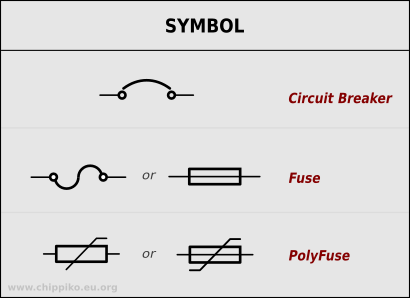 When the current exceeds the maximum limit of the fuse and circuit breaker, both of them will function as open switches, so that the current does not flow into the circuit.

There are three basic differences between Fuse and Circuit Breaker:

Examples of using Fuse are in audio systems such as amplifiers both on active speakers to car amplifiers, voltage stabilizers, car electrical systems, television, radio and many more.

However, as technology advances, now Fuse has a feature that can disconnect and connect the circuit automatically, known as the PolyFuse fuse.

PolyFuse is a type of fuse used in electronic circuits that can break off and reconnect the current automatically.

Apart from Polyfuse, the names that are often used are polymeric PTC (positive temperature coefficient), multiFuse, or polySwitch.

The way polyfuse works is if the polyfuse have a maximum current limit of 2A, and the current through it is equal to 2A or more, then the fuse is automatically cut off. And when the current from 2A decreases, then PolyFuse will automatically reconnect.

With this advantage, polyFuse has been widely used in electronic to automotive devices as a very important component for circuit security.

Good use with low to high currents to prevent overcurrent. An example of the most common use of polyFuse is on the Arduino board.

If you are someone who likes Arduino or is working on a project with it, when you connect or accidentally connect Power VCC to GND, the Arduino board will turn off automatically and when the connection is disconnected, Arduino will be active again.

If this polyfuse is not used, then when you connect the VCC and GND, the microcontroller and other components may be damaged and burnt.

Thank you for visiting the Chip Piko Eu website and hope it is useful.